Issues at WGLT's transmitter site are temporarily limiting our broadcast signal to low power. Thanks for your patience as we make repairs.
Illinois

WCBU's On Deck has everything you need to know to start your day for Thursday, January 7, 2021. Our top story is about how Illinois' congressional delegation took shelter, as pro-Trump extremists breached the Capitol building. You'll hear how Illinois' congressional delegation reacted. You'll also hear how Governor JB Pritzker has named 17 scholars and educators to the Illinois Holocaust and Genocide Commission, giving a panel that was originally formed in 2010 an entirely new membership. Erika Quinn, a Eureka College history professor whose research focuses on Central European history in among the appointees. Reporter Joe Deacon talks with Quinn about the holocaust commission's purpose and her role as a member. WCBU's On Deck for Thursday, January 7, 2021. 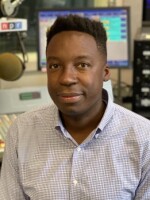