Proxy Wars: How Madigan Gets Republicans To Vote Against Their Own Plan | WGLT
Related Program:
WGLT's Sound Ideas

Proxy Wars: How Madigan Gets Republicans To Vote Against Their Own Plan 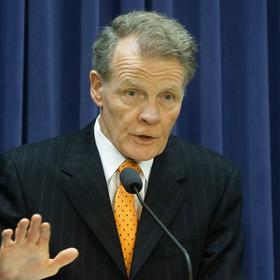 There is a lot of repetition going on at the state capitol these days.  And it has a political purpose.

By now, most people probably have a sense that things at the Illinois Statehouse have gotten downright nasty, even if it’s not completely clear what all the fighting is about—or, how it’s playing out behind the scenes.

To reveal the parts of the fighting that the public doesn’t get to see—the squabbling and cynical gamesmanship—WBEZ and Illinois Public Radio wanted to pull back the curtain.

Illinois Republican Gov. Bruce Rauner has said he has five big things he wants for the state of Illinois. On Aug. 25, the Illinois House of Representatives, which is lead by Democrats, brought one of the items up for a vote.

"This will provide tax relief to the people of Illinois," explained Rep. John Bradley (D-Marion), who called the bill.

Representatives were about to vote on Rauner's plan to freeze property taxes, something that would transform a main source of revenue for every town, city and school district in the entire state. One might think the fact that a Democrat was sponsoring one of Rauner's ideas amidst all the infighting was a huge deal—but no.

The discussion—or lack thereof—lasted all of two minutes. The package was voted down, in flames. And the media—Illinois Public Radio included—ignored it.

Because, this had happened before. Many, many times.

Every time, it was the same result: A brutal, definitive death. It's become so routine by now, that Democrats like Rep. Elaine Nekritz (D-Buffalo Grove) joke about it.

Altogether, property tax relief was brought up for a vote 14 times in just four months. That never happens. Bills usually get one chance, maybe two if they just miss the goal line—not a dozen.

It's a not-so-subtle way of Democrats taking one of Rauner's ideas and—in public—burning it to the ground. Over and over, on almost a weekly basis.

"Boy, if we wanna know why citizens are skeptical, especially in its governance and its government. This whole process. What an embarrassment," Rep. Ron Sandack (R-Downers Grove) said.

Sandack is the designated mouthpiece for House Republicans. Just about every time Democrats called a vote on the property tax freeze, Sandack stood up, and railed.

"There's no reason to believe that this is any more legitimate than the eight, nine maybe 10 previous instances of this charade. This joke. This embarrassment. This waste of time. This sham. Because this is the personification, the definition, the embodiment, of a waste of time," Sandack said.

Part of the issue is that Republicans are watching one of their big-ticket items die over and over. But it’s even more complicated than that: GOP legislators are helping do it; they’re voting against against property tax relief.

Democrats wouldn't ever go for that. So the way Democrats have played it, it’s a little complicated. They break Rauner’s single proposal in two, so that each part is voted on separately. That way Democrats get to look good voting to freeze your property taxes, then also make labor happy by killing the governor's anti-union proposal.

And killing that second part, that’s a deal Rauner won't go for. So Republicans vote against all of it—and that’s how you get a bunch of Republicans voting against property tax relief.

Rep. Mark Batinick (R-Plainfield) said Democrats are playing games. At this point, he refuses to vote at all.

"I don't vote,” Batinick said in an interview. “Fourteen times, 15 times, 100 times. At what point are we doing to start being adults and start actually addressing the issue instead of you, know, worrying about what's going to be on a mailer?"

By “mailer,” Batnick was alluding to the political implications of all this. Democrats can legitimately print campaign fliers that say something like, “Republicans stood in the way of property tax relief a gzzillion times.” An attack ad like that has already gone out in Batinick's neighborhood.

Democrats don't openly admit to this strategy; it's no political setup. They have said they’re genuinely trying to compromise—after all, they presented a property tax freeze 14 different times.

The thing is, if Democrats were just wanting to use this against Republicans for campaign reasons, that's been taken care of.

At a press conference, Illinois Public Radio asked Democratic House Speaker Michael Madigan why his party keeps calling the same measure over and over, when it always meets the same fate? What's the point now? Isn't it just a little gratuitous and a waste of time?

VINICKY: I know it.

MADIGAN: And so we're just abiding by that principle and providing opportunity to these Rauner Republicans in the House to fulfill their promise to freeze real estate taxes. In life sometimes, people are a little slow to take advantage of opportunities. So we don't want to foreclose the opportunity.

When asked about plans to call the property tax proposal up for the same vote again in the future—if Democrats plan to keep putting Republicans through this—one of Madigan’s floor leaders said, they’d keep doing it until, “something breaks loose.”

By now you probably have a sense that things in Illinois state politics have gotten downright nasty - even if it's not completely clear what all the fighting is about. But there's more to that fight than the public gets to see. There's squabbling and gamesmanship and backbiting that rarely makes the news. Democrats have been using tactics to get under the skin of Governor Bruce Rauner.  But as IPR's Tony Arnold reports, Rauner has also been doing something that's really been getting under Democrats skin.