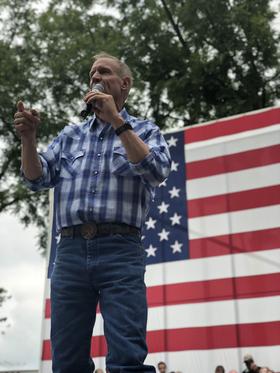 In an effort to deliver a message of unity in the Republican party, both statewide and nationally, Gov. Bruce Rauner offered a rare show of support for the Commander in Chief at Wednesday's GOP rally in Springfield.

The Republican governor regularly distances himself from President Donald Trump, sometimes refusing to even say his name.

Now, following a divisive primary and facing a third party conservative challenger,  Rauner may be looking to earn back support from the far-right by praising Trump.

Rauner did condemn Trump for calling his former White House aid a “dog” in a recent tweet. Rauner called that “appalling rhetoric.”

Illinois Republicans are converging on Springfield and the Illinois State Fair for Governor's Day.

The annual festivities Wednesday draw a focus on the crucial November balloting. Gov. Bruce Rauner is trying to win re-election along with a slate of statewide and congressional candidates.

Rauner was scheduled to speak at 1 p.m. The multimillionaire faces billionaire Democrat J.B. Pritzker in a tough fall campaign.

Statewide and local Democratic candidates gathered Wednesday in Bloomington as part of a kickoff rally ahead of Democrat Day at the State Fair.

Rauner To Spend Millions To Help GOP Chances In November

Gov. Bruce Rauner is spending millions of his own dollars to help fellow Republicans in the November election.