What The 'Year Of The Woman' Looks Like In Illinois | WGLT

What The 'Year Of The Woman' Looks Like In Illinois

Erin Cetindag and Delaney Flattery stopped by the Sangamon County building to vote early on a recent Saturday. The two college students were home in Springfield on break from schools out-of-state.

"That was the most fun test I’ve ever taken," laughed Cetindag, a senior at American University.

"We turned it in and got stickers," Flattery, a senior at Butler University added.

When asked about the gender diversity of the candidates they just voted for, both noticed something.

"Looking at the ballot, it was a lot of men," Cetindag said. "It’s not shocking. It’s one of those things where it’s upsetting even if it’s not surprising." 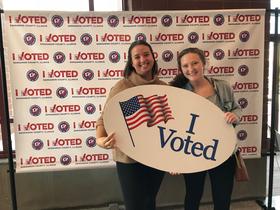 In Illinois, the number of women candidates continues to climb. But in 2018, the state isn’t seeing the same surge as many other parts of the country where a record number of women are running for Congress, governorships and state legislatures. So many that some have proclaimed this election the second "Year of the Woman."

Illinois has never elected a woman governor, and none are running for the top job this year. About the same number of women are running for Congress, and there’s been a small increase in the candidates for the General Assembly this cycle compared to last.

Jean Sinzdak, associate director of the Center for American Women and Politics at Rutgers University, describes the increase nationwide as a "dramatic surge," and says it's almost completely on the Democratic side.

Illinois is already one of the top ten states when it comes to women in the state legislature – at 35 percent. Compare that to around 20 percent in neighboring Iowa and Missouri — states that are seeing big jumps in the number of women running.

"Illinois is just very far ahead of some of the other states," said Debbie Kepple-Mamros. She trains women who want to run for office through a nonpartisan program called Ready to Run Illinois, an affiliate of the Rutgers center.

"You’ve got more Democrats already in the General Assembly," she said.

Mamros says that could explain the small increase in women running for the Illinois legislature compared to two years ago.

Ninety-two women are running this year, compared to 87 in 2016, according to the Center for American Women and Politics. That year, Illinois broke its previous record of 74 female candidates.

Increasing those numbers was one recommendation from a statewide panel investigating ways to end sexual harassment in state politics. The panel set out a challenge: elect women to at least half of all state, county and local political offices. 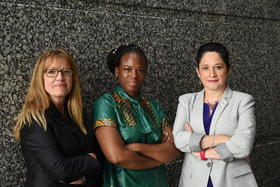 "Of course [women] are 50 percent of the population, if not 51 percent," said Democratic State Rep. Carol Ammons, who is on the three-member panel. "And so I believe, and the other members of the panel believe that we have to have balance government and to balance that government, we need representation to be equal."

But what does Illinois need to do to get to equal representation?

To start, Ammons says more training for women who want to be candidates, an ability to use campaign funds for things like child care, and a limit to money in political campaigns.

One more recommendation from the panel was a culture change at the top.

"Right now, there needs to be significant commitment from the leadership of the parties to begin to invest in women candidates up and down the ballot," Ammons said.

Mamros says those last two issues - money and party power - are connected, and are additional reasons we don’t see more women in politics.

"It's all about money. It really is," she said. "The parties raise the money; the parties are the ones who have the connections to the large donors."

Still, Congresswoman Cheri Bustos, a Moline Democrat, says the challenges of taking on an incumbent shouldn’t discourage women from running. She succeeded in 2012 - winning a three-way primary and going on to defeat a one-term incumbent.

"I'm here to say it can be done, absolutely," she said. "You have to have an ability to not take things personally because it's a brutal thing to go through a high-level campaign."

Bustos says she supports Casten and thinks he’ll win. But she says having so many women in one primary "does not help" the goal of getting more women elected.

"There are a lot of slots that people can run for, library board, school boards, city councils, state [representative], state senate, Congress," she said. "And part of it is working out some of those things behind the scenes to make sure that we do have better diversity when the winner is said and done."

Bustos started a training program, Build the Bench, aimed at women, young people and people of color to prepare them for running for office.

Mamros says demand for training programs like Build the Bench and Ready to Run continues to rise.

Back at the Sangamon County polling place, Cetindag says she’s hoping to see not only more women on her ballot next election, but more choices. She noticed many of the races she voted in were "just one guy" running.

"I really hope that that starts to change over the coming years because it’d be nice to not only vote for women but actually have different choices between those elections," she said.

The upcoming general election will decide whether Republican Bruce Rauner gets another term as Illinois governor or if the voters will choose to go with Democrat J.B. Pritzker.

But there’s one outcome of the election we already know for certain: Illinois will continue its experiment with amateur politicians running state government.

The question of what office should oversee local elections divided candidates Tuesday at GLT’s McLean County Board forum for Districts 2, 8, and 9.

What’s With That 'Reject City Election Law' Question On The Ballot?

Among the many races and measures on the ballot for Bloomington voters this election is a proposal to do away with the agency that printed the very ballots they are using.