With the right certification, called a 14(c) certificate, business owners can hire people with disabilities at less than the minimum wage.

Some lawmakers want to change that by no longer allowing certification and phasing out the so-called subminimum wage over five years.

“Data from the Illinois Department of Labor show that some of these wages fall below $1 an hour, including individuals with mild disabilities who are paid as low as 40-50 cents an hour,” said state Rep. Theresa Mah, a Democrat from Chicago.

Advocates say the legislation could help more than 10,000 workers with disabilities.

Megan Norlin recently started a full-time job with the Illinois Network of Centers for Independent Living (INCIL). She has a disability and makes a competitive wage. 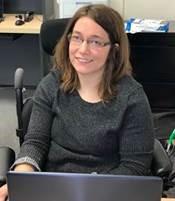 "This is what this bill is about: giving people a choice to find or even build a job that they want and be rewarded accordingly with a real wage, which they can then choose to spend any way they wish, as you all do," Norlin said.

“We’re not here to demonize or villainize any provider,” Croke said. “What we’re here to do is to say with a loud, unequivocal voice that we need to strengthen the system of services and supports for people with all disabilities in Illinois.”

The measure would also create a fund to help employers pay people with disabilities competitive wages. Each worker now in a 14(c) position would receive a customized work plan.

The legislation is House Bill 3340.

An amputee has found a new way to play the game she loves. Now, Ashley Green of Mackinaw aspires to help others who have encountered a disability.

Advocate: Businesses Must Do More To Aid Disabled

Disabled Find Their Own Voices To Advocate

Some McLean County residents with disabilities are doing more than simply fighting to live independently. They are finding their voice to help others overcome the same challenges they face.