On the last episode of Food Trek, we asked Raghela Scavuzzo, associate director of food systems development at the Illinois Farm Bureau and the executive director of the Illinois Specialty Growers Association, if we could ever get to a place where local food systems play a significant role in community, economic, and environmental sustainability here in central Illinois.

“Long story short is, can we get there? Yes. Are we on the cusp of it? Yes, but we have to look at it in a different way,” she said.

And that means looking differently at every piece of our farming and food system. Everything, including production, aggregation, processing, distribution, and a whole slew of social, economic and environmental issues like equity and diversity in the local food economy, food security, soil regeneration, nutrient loss … it goes on and on.

But it seems the best place to start is at the beginning of all of that: Building a local food system starts on the farm.

“So if we changed the way we thought about agriculture, there would be a lot more people farming. We would have to have a lot more people doing it,” said Cassidy Dellorto-Blackwell of The Land Connection, an Illinois organization working to develop community-based food systems in our state.

“They wouldn't be operating likely at the scale of a lot of our corn and soy farmers. They're not going to be one person managing a couple thousand acres. There's going to need to be more people employed, more smaller, more intentional operations,” she said.

But getting more people on farms is no easy feat with conventional agriculture continuing to position less and less farmers on larger swaths of land.

An analysis by University of Illinois’ farmdoc daily of the 2017 USDA Census of Agriculture showed that farms under 1,000 acres continued to lose control of Illinois farmland. In 1997, farms over 2,000 acres held 16% of farmland. But by 2017, that number had risen to nearly 33%.

With a trend like that, what room is there for beginning farmers?

“Land access, as we know, is one of the biggest barriers to getting into agriculture. And so by simply moving a couple acres here or there out – and even two acres is a lot of production in specialty crops – you're seeing that as a way to diversify income on the farm and bring that next generation on,” Scavuzzo said.

But would that ever really happen? For at least one farmer here in central Illinois, that exact scenario actually played out.

“We were lucky enough to find a property that we could rent affordably,” said Evan Barry, owner of Down River Farm in East Peoria. “He was very generous in letting us use his land for very cheap. We grow pretty much every vegetable that you can in this area that people will buy. So we only grow on two acres in total.”

Because of that access to affordable land, Barry is entering his fifth growing season this year on those two acres where he grows 40 different types of produce that he sells at farmers markets, to local restaurants such as Ardor and The Woolly Bugger in Peoria, and to grocery stores such as Green Top and Sous Chef, and to multiple outlets in the Chicago area.

While Barry’s story of finding land access with an existing farm is inspiring, Jacquelyn Evers, the executive director of The Land Connection, says land access will take more than just the goodwill of large farmers to really move the needle.

“These are big state, local, federal policy changes that will have to happen in order for you or anyone else to start small-stepping in to farming,” said Evers.

Added Barry: “Right now, the benefit and all of the policy and all of the subsidies go towards the farmer with the most land. It's impossible to get into farming, as a young person.”

“Advocating for bigger policy change will ultimately be what tips our system to a place that allows anyone regardless of their background to enter into agriculture as a profession, that's enough to work full time and receive a livable salary for their family,” said Evers.

And for Barry, generating that living wage for his family and his employees is just one piece of what he believes he needs to do to make his farming business sustainable.

“We're really thinking about the three P’s that a lot of corporations talk about, I think, of sustainability. Which is planet, people, and profits. So trying to make our employees’ lives a little bit better, so that younger people actually want to farm. Trying to make more money so that we can continue to do this and pay our people better. And therefore, continue stewarding the land and being able to keep up with all the adaptations we have to make in regards to the climate,” Barry said.

“The elephant in the room is that we need more farmers to make a local food system work. Young people in general need more of a foot in the door to have stake in their own future,” he said.

But despite all the challenges for farmers who are working to build the foundation for a local food system, Barry said he sees changes within the community that give him hope.

“I think that folks in Peoria are becoming more and more aware of how the food system works, just trying local food and just experimenting. So I think that it's gotten a lot better,” Barry said.

On the next Food Trek: Now that we've spent a few episodes giving you some egregiously oversimplified history and background of farming and food systems in Illinois, we'll take the next few stops on this journey to sit a spell with more of our region's creative and innovative farmers and food makers. 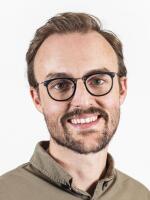