Local News
Coronavirus
WGLT's reporting on the coronavirus pandemic, which began in McLean County in March 2020.

The coronavirus has ripped away many things from many people, including high school seniors.

Normally, Bloomington-Normal’s seniors would now be enjoying those final big moments before adulthood begins—prom, the senior luncheon, and graduation, to name a few. But the pandemic put an abrupt stop to all that, while also throwing a pretty expensive curveball into college planning.

“It’s a little bittersweet,” said Grace Nord, a senior at Normal Community High School. “I understand why they’re doing it, and it is important for public health, but I would have liked to go back and see my friends, my teachers, and have a formal graduation, all those nice things that come along with senior year.”

"I might be missing out on senior picnic, prom, and graduation, but I think that my inconveniences right now are honestly a privilege."

“It was weird. A month ago was my last day of school and I didn’t even know it,” said Ellie Boitnott, a senior at Normal West.

Normal West senior Aleena Barlow said she was not surprised by Pritzker’s announcement. And, as an immunocompromised person, she fully supports stay-at-home measures.

“It was still a shock. It’s such a surreal event,” Barlow said. “A part of me did hope we would end up going back, simply to have the opportunity for seniors to have those activities—all that—in a timely manner.”

Senior prom has been postponed (at least) until June. The senior picnic and luncheon were canceled.

Normal West’s graduation, originally scheduled for May 23 at Grossinger Motors Arena, is still up in the air. The principal recently sent everyone an email asking if they had a preference for alternative graduation formats, such as postponing until Aug. 1, doing it online, or holding a drive-through event.

Barlow had several friends who were going to perform in the now-canceled spring musical, “Newsies,” a callback to one of the first songs they sang together in middle school.

“It was sort of our big last hurrah before we graduated and went off our separate ways,” she said.

Students who just finished their K-12 education with online learning may start college the same way. Some college campuses have already said they plan to begin the fall semester online.

Barlow planned to attend Illinois State University and study psychology. And most likely, she will. (ISU has not announced plans for the fall semester. Summer classes and new-student orientation were moved entirely online.)

“I don’t want to lose my spot in the program, and I worked very hard to get that,” Barlow said about the possibility of changing her plans. “But again, the costs are kind of high for having virtual learning, so I may rethink it depending on what they say as we get closer to fall.”

Boitnott plans to study biology at the University of Kentucky starting in the fall. She doesn’t know yet if her summer orientation will be on campus or online.

“I’d be kind of bummed,” Boitnott said about possibly starting fall online. “I planned to rush (a sorority), so that would kind of take out that experience for that time. And I was looking forward to football games and being on campus and creating my own schedule and meeting people.”

Nord, the NCHS student, plans to attend ISU. For the rest of this semester, she’ll be working on her own coursework while helping her younger siblings with theirs. Her father and stepmom are essential workers, so she and her sister, Ashley, an NCHS junior, tag-team the big sister role.

“Some of the stuff they do is very sweet and very fun to do with them. But sometimes they get kind of rowdy. They’re stuffed up. They don’t want to be inside doing e-learning. They’re 7 years old,” she said.

Nord has a very mature perspective, like the other students interviewed by WGLT.

“I might be missing out on senior picnic, prom, and graduation, but I think that my inconveniences right now are honestly a privilege. I’m not a senior in college. I’m not an essential worker. I’m not immunocompromised. I'm not recently unemployed and, most importantly, I’m not currently sick. I’m happy and I’m healthy, so I really have nothing to complain about,” she said.

We’re living in unprecedented times when information changes by the minute. WGLT will continue to be here for you, keeping you up-to-date with the live, local and trusted news you need. Help ensure WGLT can continue with its in-depth and comprehensive COVID-19 coverage as the situation evolves by making a contribution. 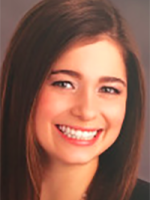