'The Coliseum of Champions' Slated To Open In July | WGLT

'The Coliseum of Champions' Slated To Open In July 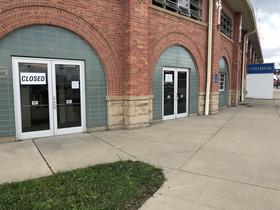 The historic building was closed back in 2016 when it was deemed structurally unsafe.

Last year, the Fairgrounds Foundation, which is the charitable organization leading the grounds' renovations, announced a contest to name the rehabbed facility which was open to members of Illinois 4-H, FFA, and the Junior Horseman's Council.

The winning entry was submitted by Emma Eathington of the Fairview Huskies 4-H, Elaina Kessler of the Clay City FFA, and Kyle Neisler of Country Roots 4-H Club of Montgomery County. They will be guests of honor at the grand reopening of the building and they received a silver platter of recognition and a Mega Pass to the 2019 Illinois State Fair.

The bid for renovations went to a Springfiled-based contractor, R.D. Lawrence Construction Co., for $10.2 million. They plan to get the building open by July 20th of this year. This is the same contractor that lead the repairs of the Illinois Governor's Mansion.

John Slayton is the chairman of the Fairgounds Foundation. He said they’ve already made progress on construction.

“Phase 1 and 2 which they’re in right now, will be fixing all the beams and the infrastructure inside the building," he said. "And columns around the facility that corroded over the last few decades.”

Slayton recognized that the Coliseum is number one on the list, but there’s lots of work to be done elsewhere. Total renovation estimates for the grounds in Springfield and the Du Quoin State Fairgrounds are roughly $185 million.

“Every building on the fairgrounds needs some kind of attention," said Slayton. "The exposition building has roof issues, that will be a major project. The dairy barn where the dairy cow sits during the state fair has tarps on the roof, so that building needs to be repaired.”

Gov. J.B. Pritzker announced Monday that he’s donating half of the money raised by ticket sales for his inaugural gala. That totaled $800,000. The other half went to the Cabrini Green Legal Aid in Chicago.

The Illinois State Fair lost nearly $210,000 on its Grandstand concerts in Springfield last month after seeing record ticket sales a year ago.

Republicans held their annual rally at the Illinois State Fairgrounds in Springfield Wednesday with a message of party unity.  Bruce Rauner still holds the top office in state government. But as he pushes for re-election, he’s trying to appease conservatives who feel betrayed and whose support he needs to win a second term.

JFK In Springfield 1962: A Motorcade, A Rifle And A Mystery

A year before President John F. Kennedy was assassinated in 1963, he made a visit to Springfield where he stumped for congressional candidates.   It appeared everything went as planned.

But recently, unclassified documents were made available explaining an incident that seemed to foreshadow what took place in Dallas.