The public can learn about Rivian’s plans to install a large-scale wind turbine at its Normal manufacturing campus during an open forum next week.

The electric automaker says the proposed turbine is part of its long-term renewable energy efforts to reduce its carbon footprint. Rivian joined The Climate Pledge in 2020 aiming to reach net-zero carbon emissions by 2040, which is 10 years ahead of the Paris Climate Agreement.

“To us, our job isn’t done when our vehicles come off the line,” Andrew Peterman, Rivian director of renewable energy, said in a statement. “While we’re working hard to help electrify transportation, we’re also pushing to accelerate the shift to carbon-free electricity for all. This wind turbine is an early step on that path, and it’s also a beacon of our vision for a clean energy future.”

The wind turbine would allow Rivian’s Normal-made trucks and SUVs to be powered by renewable energy for their first charge. Over the turbine’s 25-year lifetime, Rivian says it could save over 175,000 tons of emissions, which is equivalent to taking about 34,000 internal combustion engine vehicles off the road for one year.

To identify an appropriate location, Rivian says it commissioned studies on potential impacts from the sound and shadow flicker of the turbine, as well as any potential threats to endangered species, cultural resources, or communication systems.

The planned site is inside Rivian’s vehicle test track. The wind turbine would be about 500 feet tall with white, non-reflective blades. Sound levels are estimated to reach a maximum of 42 decibels, which is about as loud as a refrigerator, according to Rivian.

The public forum focused on the turbine will be from 5-7 p.m. Wednesday, June 29, at Heartland Community College’s Astroth Community Education Center. The Normal Planning Commission will consider the project during its meeting on July 7. 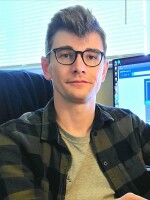 Zach Zoller
Zach is a reporting intern at WGLT. He joined the station in 2022.
See stories by Zach Zoller
Related Content