Obituary: Sister Mary Antona Ebo, one of the 'sisters of Selma' | WGLT

Obituary: Sister Mary Antona Ebo, one of the 'sisters of Selma' 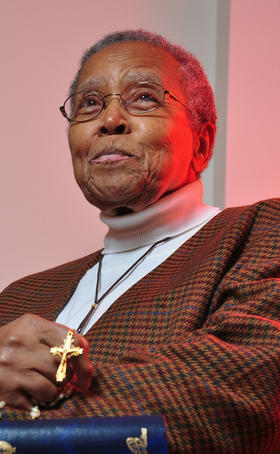 Updated at 3:40 p.m., Nov. 13 with information on services — Sister Mary Antona Ebo, one of Martin Luther King Jr.’s most reluctant but eventually most powerful converts to the civil rights movement, died Saturday. She was 93.

When King called on the nation’s religious leaders to join the 1965 Selma to Montgomery voting rights march, Sister Ebo was a Franciscan Sisters of Mary nun in St. Louis. She was aware that hundreds of earlier marchers had been beaten bloody by Alabama state troopers and one, a young, white minister named James Reeb, had died of his injuries.

But she answered the call.

“If they would beat a white minister to death on the streets of Selma, what are they going to do when I show up?” Sister Ebo told the St. Louis Post-Dispatch in 2015, the 50th anniversary of the march.

An interfaith contingent of 54 from St. Louis arrived in Selma on the morning of March 10, 1965, three days after what became known as “Bloody Sunday.” For safety, their chartered plane landed on a makeshift runway in a farmer's field.

The Archdiocese of St. Louis had originally planned to send only priests, but later agreed to send six nuns as well. One of the six was Sister Ebo.

The “Sisters of Selma,” as they became known, were the first delegation of nuns to join the protest. They stood front and center in the marchers’ second attempt to cross the Edmund Pettus Bridge, which spans the Alabama River, on the first leg of the 50-mile walk to Alabama’s capitol in Montgomery.

In full habits, the Sisters of Selma “stole the show from the boys,” Sister Ebo recalled. And she was the star. Reporters, many of whom had never seen a black nun, swarmed her. They asked why she was there. “To bear witness,” she answered simply.

From Selma to Ferguson, Sister Ebo bore witness for more than half a century. Sister Ebo, who had previously suffered a stroke, entered hospice last week. She died Saturday) at The Sarah Community in Bridgeton.

When the St. Louis religious delegation arrived in Selma, they went directly to Brown Chapel African Methodist Episcopal Church, the gathering place and launching point for the protesters. As she entered the church, Sister Ebo was surprised to hear Andrew Young Jr., the future mayor of Atlanta and future Congressman, introduce her as “one of the great moral forces of the world.”

“I didn’t even know that that was me,” Sister Ebo told the Post-Dispatch with her characteristic humor.

With the St Louis group out front, they marched only half a block. They were stopped by Selma’s mayor, Joe Smitherman, backed by a wall of heavily armed state troopers among a sea of Confederate flags.

The marchers had been thwarted again, but this time they had diminutive, bespectacled and beautiful, 40-year-old Sister Mary Antona Ebo. She explained to local officials, the crush of reporters and the world, why she was in Selma.

She told them that the day before, she had voted in St. Louis, adding “and I’d like to come here today and say that every citizen – Negro as well as white – should be given the right to vote. That’s why I’m here today.”

No one crossed the Edmond Pettus Bridge that day. They knelt and prayed before returning to the church, then home.

It would be more than 40 years before Sister Ebo would set foot on the bridge named for a Confederate general and reputed Ku Klux Klan leader. But she had already stepped into history.

Elizabeth Louise Ebo, Betty Lou to her family, was born April 10, 1924, in Bloomington, Illinois. Her mother, Louise Teal Ebo, died when she was 4. Unable to keep the family afloat, her father, Daniel Ebo, took Betty Lou and her two older siblings, Walter Ralph and Mary Jeanette, to live in the McLean County Home for Colored Children in Bloomington.

A little boy at the home was Roman Catholic, but was not permitted to attend his church. While she and the boy were on an errand one day to pick up day-old bread, he sneaked into a Catholic church; Betty Lou followed.

She was moved by the boy’s solemn longing for his church and the communion ritual he described. When he went to the altar to pray, “I cased the joint, and it was so beautiful,” she told the Archdiocese of New Orleans Clarion Herald in 2014.

Sister Ebo came from a long line of Baptists but that day marked the beginning of her conversion to Catholicism.

As a child, she was hospitalized several times for tuberculosis. A nurse and the hospital’s visiting priest helped her get into Holy Trinity Catholic High School in Bloomington, where she was the only African-American student.

At age 18, she converted to Catholicism.

After graduating from high school, the young woman applied to a Catholic nursing school, but was rejected because of her race. It was, she said, one of many bruises she carried throughout her life.

Undaunted, she applied to the United States Cadet Nurse Corps at St Mary’s Infirmary, a program that trained replacements for the hospital’s volunteer nurses serving in World War II. The infirmary was a hospital for blacks, but the young woman who would become Sister Ebo was the first African-American accepted into its nursing program.

In 1946, she and two others were the first African-American women to enter the Sisters of St. Mary in St Louis (now the Franciscan Sisters of Mary).

She had just been promoted to department head at St. Mary’s Infirmary, the first black person to attain that position, when she heeded the call to Selma in 1965. Two years later, she became head of St. Clare Hospital in Baraboo, Wisconsin. She was the first African-American woman in the nation to run a Catholic hospital.

She earned a master's in theology of health care from Aquinas Institute of Theology in 1978, spent several years as a chaplain at St. Mary's Hospital in Madison, Wisconsin., and later at the University of Mississippi Medical Center, before returning to St. Louis.

Sister Ebo, who casually referred to Jesus as “J.C.,” compared chaplaincy to being a clown.

“Clowns don’t do a lot of talking,” she told the old Catholic Herald Citizen. “They’re quiet. They bring happiness by smiling in a way that is both happy and sad. It’s a wry smile that says, ‘I’ve experienced life – both the gladness and the sadness. I’m human just like you.’”

From Selma to Ferguson

She and civil rights pioneer Rosa Parks received the Eucharist from Pope John Paul II during his 1999 visit to St. Louis.

That same year, she met Deitch on a bus trip to Mississippi dubbed the Jewish Freedom Ride. They were going to commemorate the deaths of Civil Rights workers James Chaney, Andrew Goodman and Michael Schwerner, who were murdered by the Ku Klux Klan in 1964.

She called for charges to be reinstated against Edgar Ray Killen, the Klansman and Baptist minister who had organized the murders. Several others had been found guilty, but the jury deadlocked on Killen because he was a minister. The second jury did not; he was convicted of manslaughter in 2005.

Sister Ebo returned to Selma several times over the years, but it was 2013 before she made it to the Edmund Pettus Bridge. Democratic U.S. Rep. John Lewis, who became the enduring symbol of Bloody Sunday, was her escort.

One of her proudest moments was in 2010 when she received a kiss on the cheek from President Barack Obama. It was a thank you for her help in electing him the first black U.S. president in 2008, and for her decades of working for peace and justice.

Shortly after a then-Ferguson police officer shot and killed black teenager Michael Brown on Aug. 9, 2014, Sister Ebo had a friend drive her to the site of his death so she could again bear witness.

When a reporter from Birmingham interviewed her, she advised him to delve deep.

"You are not here to take a superficial picture,” the St. Louis Review reported her saying. “The mistake I think many of us made in the '60s is we were taking somebody else's word for it; you have to look under the rug.”

The reporter agreed, saying “I think we were missing it, too, [in the ’60s] because we missed you.”

According to the St. Louis Review, a private burial will be held in Resurrection Cemetery.

In lieu of flowers, donations may be made to Cardinal Ritter High School, the archdiocesan Peace and Justice Commission, St. Matthew the Apostle Church, St. Nicholas Catholic Church or St. Alphonsus Liguori “the Rock” Catholic Church.

Former Bloomington Mayor Jesse Smart joked as he received the McLean County History Museum's History Makers Award, "We all at some time in our life hope that at our funeral somebody will have something nice to say.  So, I appreciate the fact that I am here tonight ."[to hear nice comments.]

Each year the McLean County Museum of History Board selects the History Makers who are recognized for outstanding, lifelong contributions of time and talents that have helped make McLean County a better place to live.

This year's History Makers include:

That's according to attendance figures for the Cruisin' with Lincoln on 66 Visitors Center in the McLean County Museum of History.