In addition to providing a public service to the community, WGLT also gives Illinois State University students an opportunity to learn alongside professional journalists through internships and paid positions.

The WGLT Scholarship, now in its fourth year, is made possible by the Dr. Robert & Marilyn Sutherland Endowment and the WGLT Future Fund Endowment.

Learn about this year's winners:

Mary Kloser is an Illinois State University senior in the School of Communication studying mass media with a sequence in interactive media. At WGLT, Mary spearheads our social media content featured on Facebook, Twitter and Instagram, as well as content at WGLT.org.

Samantha Hill is an Illinois State University senior in the School of Communication studying radio/audio production. During her tenure at WGLT, Samantha has produced local shows including our weekday newsmagazine, Sound Ideas, and our weekday podcast, The Leadoff.

Jordan Mead is an Illinois State University senior. She’s a double major in the School of Communication studying journalism and Department of Languages, Literatures and Cultures studying Spanish with a focus on Latina/o studies. Jordan is a student journalist in the WGLT newsroom contributing audio and print stories.

Olivia Streeter is the WCBU Scholarship recipient for 2022. 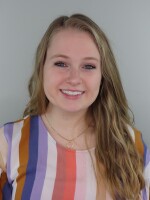 Mary Kloser
Mary Kloser is a social media and online writing intern at WGLT. She joined WGLT in summer 2021. She's also a student in the School of Communication at Illinois State University.
See stories by Mary Kloser