City Mentorships Take Teen Enrichment Nonprofit To The Next Level

A former Bloomington Housing Authority resident has created a space to encourage students in the community to achieve goals they might not have been confronted with.

Andre Hursey’s community work began with the Boys and Girls Club of Bloomington-Normal and later the Western Avenue Community Center. A few years ago, Hursey took a leap of faith and created the Jule Foundation, specifically to pour into the Bloomington-Normal youth. The foundation is a nonprofit teen enrichment program that provides academic, educational and mental health support. It’s now entering the second year of a growing mentorship initiative with the City of Bloomington.

“There's not a lot of culture here in this town. These kids don't get exposed and don't get opportunities, and I think a lot of times when you can give them that it makes a huge difference,” said Hursey.

The Jule Foundation debuted in 2017. It works with students from sixth grade to seniors in high school.

“It has to be about the kids in order for it to be successful. I just really wanted to give these young folks an opportunity to be exposed—opportunity to get outside and explore different cities, different states,” said Hursey, the 2018 adult recipient of Normal’s MLK Human Relations Award.

Kashijion Tate is a graduate member of The Jule Foundation and now a sophomore at Alabama State University. She said she has received help through the program even after leaving for college. Tate recently applied for a job, and Hursey and staff were able to get her a letter of recommendation. When needed, Tate hops on Zoom to help out with the foundation and mentor students.

“My favorite part is just being able to watch him (Andre) teach other kids and help other kids grow like us, multiplying his organization and just helping kids become better in school,” said Tate.

A reward for students involved in the Jule Foundation holding at least a “C” average in school is being able to go on trips. Students who are struggling with getting grades up have an opportunity to get tutored through Illinois State University. The Jule signup process also gives the option for families to consent if a student needs an advocate when a parent or guardian is not available.

Mentorship program at City of Bloomington

The foundation has already found success with its mentorship program in partnership with the City of Bloomington, which began last year as a pilot.

Young people with Jule were placed in various city jobs, including the water department, human resources and the Pepsi Ice Center. There were four positions in the mentorship program’s first year, and that is expected to grow to up to 20 in Year 2.

“Exposing young people to government as a career—I will tell you that governments across the country frankly are struggling to attract minority students, so helpfully this helps,” said Tyus, also noting that not all Jule mentees are minorities. “Governments across the country are also struggling to attract a younger generation because there's so many options and opportunities out there to do other things.”

The partnership connected students to city government but also helped them make long-lasting connections and build their resumes to help in their future endeavors.

The mentorships are more than just a summer job, Tyus said. And they also pay real money, unlike unpaid internships that can be a barrier for some young people.

“It was important to show participants we were serious about this,” Tyus said. “And we needed to put our money where our mouth is. If we’re talking about how it’s important that we have diversity, if we’re saying it’s a priority, then it’s important for us to act like it.”

Hursey said internships and mentorships are beneficial for kids to see beyond Bloomington.

“I've always told them, I expect for you to go on and be very successful in life whatever that looks like. But one thing is you don’t owe me anything, but just to make sure you reach back and help the next person out that may be struggling,” Hursey said.

Kids staying involved is important to Hursey, because it keeps them focused in on their future careers and education goals.

“Especially for brown and Black kids that look like me—once you do that and you position them for those type of opportunities, I think there's a lesser opportunity for them to get into some trouble.”

Young people can register online to enroll in the Jule Foundation.

There's no subscription fee to listen or read our stories. Everyone can access this essential public service thanks to community support. Donate now, and help fund your public media. 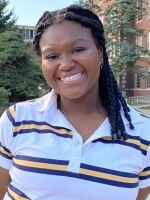